Skip to Content
September 5, 2019 7:10 pm News 3 News
GRAND TOWER (WSIL) — Black Bellied Whistling Ducks are moving farther north during migration and they’re drawing an audience.
Local bird watcher, Don Mullison, says the ducks in Grand Towner have captured the attention of the bird-watching community.
"It’s definitely been a draw for local birders, but there have been people coming down to see them all the way from Chicago, and all over the state," Mullison said.

That’s because it’s a bit odd to see this bird so far north. There have also been some reported in Sesser.
John O’Connell, a doctoral candidate in SIU’s Zoology department, says they don’t typically reside here.
"It’s very uncommon to see them in Illinois and northern states, except for the occasional vagrant bird that got lost or something, definitely not
large breeding groups, that’s new," O’Connell said. 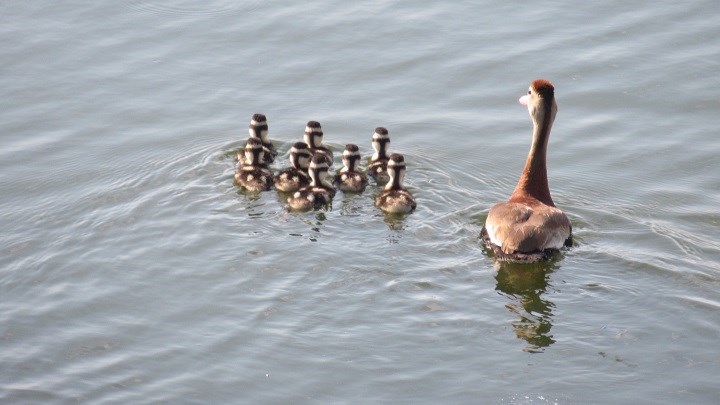 Experts are paying extra attention to these Whistling Ducks, to understand why they’re here.
"In the last five or ten years, there has been a coordinated effort with some southern gulf states that are using not only the traditional metal bands, but color-coded bands, and they’re color-coded per state," O’Connell said.
Scientists are studying to learn more about the duck’s migration, and why a similar species, the Fulvous Whistling Duck, isn’t expanding as far north.
"So if you say something simple like, warming is the factor, well then why aren’t the Fulvous Whistling ducks going on? And it might be metabolism,
it might be dietary requirements, there’s all kind of nuances there that might affect that. So it just points out that we shouldn’t oversimplify the answer," O’Connell said.
Regardless, birders and scientists alike, expect this trend to continue.