MURPHYSBORO (WSIL) — Following another night of failed negotiations, students in Murphysboro will be out of the classroom for the fifth consecutive day as teachers strike Wednesday. According to the Murphysboro Education Association (MEA), the next mediation session is set for 5.p.m. Wednesday.

We could have had this resolved tonight, but instead we are left wondering where the board’s priorities lie. The board was aware that we were writing a proposal, and chose to walk away from the table without notifying anyone in the building, including the federal mediator. We were initially encouraged by the movement that was gained. We would have stayed all night to get this done. There aren’t words to convey how disappointed we are that we will once again be out on the picket line tomorrow instead of back in school with our students where we belong.

Tonight the board suggested we enter binding arbitration, which is, in the field of education, an antiquated bargaining tactic designed to silence the voice of educators. The voice that we use to advocate for our students, our schools and our community. It would mean an outside person would be able to decide what’s best for our community. A community he or she has no ties to and will leave after a contract is enforced.

As for the financials, we have made much more movement than the board has since we began bargaining in March. We have nearly cut our initial contract proposal in half. We are .65 percent away from the true middle.  However, the board remains 2.45 percent away from the true middle of their proposals. Again, we know the board has the financial means to make our salaries competitive with neighboring districts, and we continue to ask them to do that.

The Board Team met with the Teacher Team and provided another generous offer. They refused. The Board Team then suggested to resolve the strike tonight by bringing in an independent fact finder or engage in interest arbitration per the administrative code (Ill Admin 1130.50). The Board and Teachers would agree to accept whatever amount is recommended by the independent arbitrator. Again the Teacher Team refused. Finally, the Board Team suggested a one year contract at 3.2% on the cell, which was also declined by the teacher team. 3.2% is meeting exactly in the middle from the last two offers exchanged. Each proposal presented by the Board tonight would have brought students back to school tomorrow. All three options are still on the table should teachers change their minds.

The Board also included a photo of what appears to be a piece of paper outlining these options (shown below). 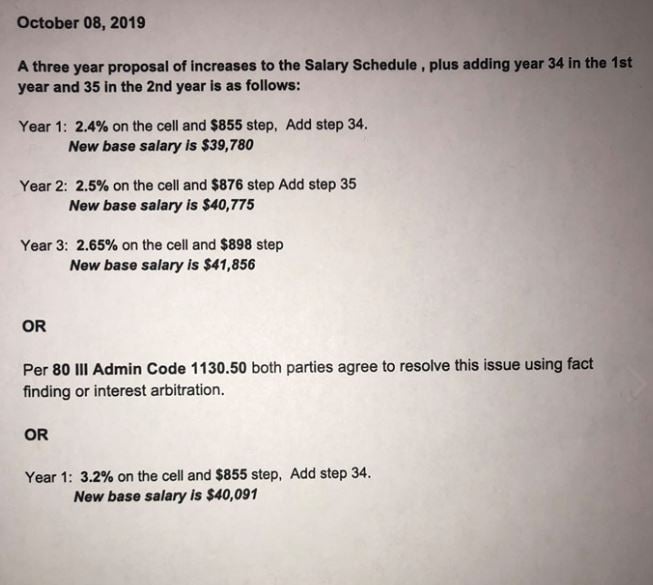 News 3 has reached out to the teachers association for a statement, and we will post it when we get it.